As the cliche goes, the Tour de France is cycling’s biggest and most important event. Every team turns up with its best kit in the hope of winning something, and every sponsor is keen to get its latest product under the spotlight.

Luckily, for those limelight-hungry brands, we’re here to tell you about all the latest and greatest new cycling tech we’ve spotted at the Tour, and no doubt coming to a bike shop near you soon (subject to strained global supply chains).

After all, unless you’re the kind of nerd that works in the cycling media (like yours truly), wading through hours of race footage and thousands of press photographs can be time-consuming and dull. You, dear reader, are too good for that. Your time is too precious. So, with that in mind, we’ve done the work for you.

If it’s new bikes you’re interested in, check out our other story on the 10 new bikes we’ve spotted at the 2021 Tour de France, but, for everything else, you’re in the right place.

We’ve curated a selection of the most important tech stories from this year’s Tour de France, so you don’t have to worry about missing a thing.

Here’s what you can expect to see:

One thing you sadly won’t see here is a new Shimano Dura-Ace groupset. Having had an exclusive first look at what we believe is the next generation of Shimano’s flagship road groupset at the recent Baloise Tour of Belgium, we’ve so far only seen riders using the current generation Dura-Ace R9100 at this year’s Tour.

Non-sponsor correct kit is making a comeback – particularly with wheels

Just a few short years ago, non-sponsor correct kit was de rigueur in the professional peloton. It was common to see de-badged tyres, saddles, handlebars and other bits of kit on pro bikes, as individual rider tastes were accounted for.

Not all equipment is created equal, but with the rise of house brands, the ever-increasing integration of modern high-end racing bikes, and increasing sponsor influence, opportunities for fussy pros to customise their bikes had appeared to be on the wane. As we’ve commented before, pros don’t always get to choose exactly what they want.

Perhaps following the example of the most successful Grand Tour team of the past decade, Team Ineos Grenadiers (who are famously not afraid of using non-sponsor correct kit), it seems more WorldTour teams are now willing to risk sponsor ire in search of performance gains.

Both wheelsets are said to be 20 per cent wider and around 11 per cent lighter than Vision’s previous top-end road disc brake wheels, Vision naturally claims these latest wheelsets are faster, lighter and easier to handle.

The already mentioned Team Ineos Grenadiers has been using Princeton CarbonWorks, Lightweight and AeroCoach wheels for both road and time trials, again in place of Shimano wheels.

Mathieu van der Poel got hold of a Princeton CarbonWorks rear disc wheel and an AeroCoach Titan front wheel for the crucial time trial in the first week, also at the expense of his team-issue Shimano wheels. He ditched his team-issue Abus time-trial helmet too, in favour of an unbranded Lazer Volante.

Stefan Kung of Groupama-FDJ also switched things up for the time trial, opting for a Shimano-branded Roval 321 rear disc wheel and what looks a lot like a Vision Metron 3 spoke disc front wheel – with the decals removed, of course.

You may be spotting a pattern here. While all of these riders seem perfectly happy using Shimano’s groupsets, it appears many pros aren’t too fond of its wheels.

Chris Froome, meanwhile, has been spotted using Lightweight wheels on his Factor Ostro VAM. This time, though, they’re in place of team-issue Black Inc wheels.

Froome’s Isreal-Start Up Nation teammate, Michael Woods, was also spotted using some rather bold five-spoke carbon wheels on the race’s first rest day. Sadly, these aren’t UCI-legal for mass-start road events, but perhaps we’ll see them in an uphill time trial at some point.

Our contact at Hunt confirmed the wheels are a prototype version of the brand’s upcoming 36 UD Carbon Spoke Tubular, weighing in at a claimed 1,151g for the pair. That figure compares to a claimed 1,260g for the closest equivalent steel spoked tubular wheelset from Hunt (the Carbon Team Tubular Disc 30).

A day may come when we can finally put this subject to bed for good and never speak of it again, but that day is not today, and so we continue to argue over the theoretical supremacy of two braking systems!

That aside, it is notable that – barring a sudden and dramatic change in fortune for Team Ineos Grenadiers – the Tour de France will, for the very first time, be won by a rider primarily riding a road bike equipped with disc brakes.

That’s because everyone else, including current race leader and yellow jersey wearer Tadej Pogačar, is now using disc brakes for practically all of the road stages.

Whether or not this settles anything remains to be seen…

The green jersey is using clinchers

Current green jersey wear, Mark Cavendish, has been one of the most exciting stories of this year’s Tour. Undoubtedly one of the greatest sprinters of all time, but there can’t have been many who predicted Cavendish would return to form quite so spectacularly.

Helping him to take three stage wins, he and the rest of his Deceuninck–Quick-Step team, have been using Specialized Turbo Cotton clincher tyres with Roval Rapide CLX carbon clincher wheels.

It’s something the Belgian team has been doing for a while now because Specialized is adamant this setup is its fastest (despite previously making a big song and dance about how tubeless tyres were the next big thing, but we’ll forget about that for now). And, to be fair, it’s hard to argue with the results.

It seems Bora-Hansgrohe (another WorldTour team sponsored by Specialized) has also taken notice because it announced its riders would also only be using Specialized Turbo Cotton and S-Works Turbo clincher tyres on Roval wheels during the Tour de France.

We’ve already touched on some of the wheels used in the first time trial at this year’s Tour, but – as always with time trials – there’s plenty more tech to talk about.

We saw lots of custom front ends, especially among those riders aiming for a good result. Given body positioning and the leading edge are both so important to aerodynamics, this is an area many teams have spent a lot of time (and money) optimising.

Teams sponsored by Vision, such as Jumbo-Visma and EF Education–Nippo, also had custom-moulded carbon fibre aero extensions on the bikes of key riders like Primož Roglič and Stefan Bessigger.

On the leading edge, Max Walscheid of Team Qhubeka NextHash had a new Ekoi time-trial helmet. It’s a classic teardrop design with a mirrored visor covering the rider’s eyes and ears.

As usual, big chainrings were popular, with many riders using 58-tooth chainrings up front. It appears Walscheid went one step further than everyone else and used a 60-tooth big ring on his time-trial bike, though.

Jumbo-Visma riders also had an updated version of Lazer’s Volante time-trial helmet. Perhaps hoping to avoid a situation where removing the visor exposes the rider’s ears in a slightly unflattering (and perhaps less aerodynamic) manner, the updated helmet now covers the ears with or without the visor.

Richard Carapaz of Team Ineos Grenadiers also had a new, and as yet unreleased, Kask time-trial helmet. It looks very similar to the Kask Bambino Pro Evo but with the tail chopped off.

Pello Bilbao of Team Bahrain Victorious also had a team-only unpainted Merida Warp TT time-trial bike. Presumably, the aim was to save weight, but given performance in a time trial like this one is primarily determined by a rider’s power and aerodynamic drag, it may have been a lot of work for not much gain.

What likely did help him, however, was his new skinsuit (because skinsuits cover your body, they can potentially make a significant difference to a rider’s aerodynamic efficiency). Made by team sponsor Alé, the so-called Space Jet skinsuit is using new fabrics that use surface texture roughness to help generate a turbulent boundary layer around the rider in key locations, and reduce aerodynamic drag.

We’ve seen similar tech from a number of different clothing brands in recent years, and the concept is even used to make aero socks these days. What a time to be alive.

Lastly, though his setup wasn’t the most optimised on show, Michael Schar of AG2R Citroën Team takes the Flat Back Award for the most aggressive time-trial position on show. Well done to him.

Michael Shcär’s time trial position is pretty aggressive. Is this the flattest back in the Tour de France?
Tim de Waele/Getty Images

Yes, paint adds weight to a bike, but it can also look really cool. In our opinion, there’s nothing better than a snazzy special-edition paint job.

Likewise, we covered Julian Alaphilippe’s world champion themed Specialized Tarmac SL7 back in April, but we’ve had another chance to ogle here at the Tour.

Tadej Pogačar has also been riding a Colnago V3Rs in half black, half yellow form. Perhaps Colnago doesn’t want to tempt fate by going full yellow before the race is actually won, or maybe they’re just worried about adding too much weight.

Spreading the love more equitably, the entire Trek-Segafredo team has been riding Trek bikes with some stunning red paint jobs from Trek’s Project One custom programme. More bikes like this, please.

Fri Jul 9 , 2021
Google LLC and AT&T Inc. today introduced two new edge computing options aimed at earning it simpler for enterprises to go after emerging technology use scenarios this kind of as deploying robots in retail suppliers. The options were being developed as part of a partnership that the firms inked very […] 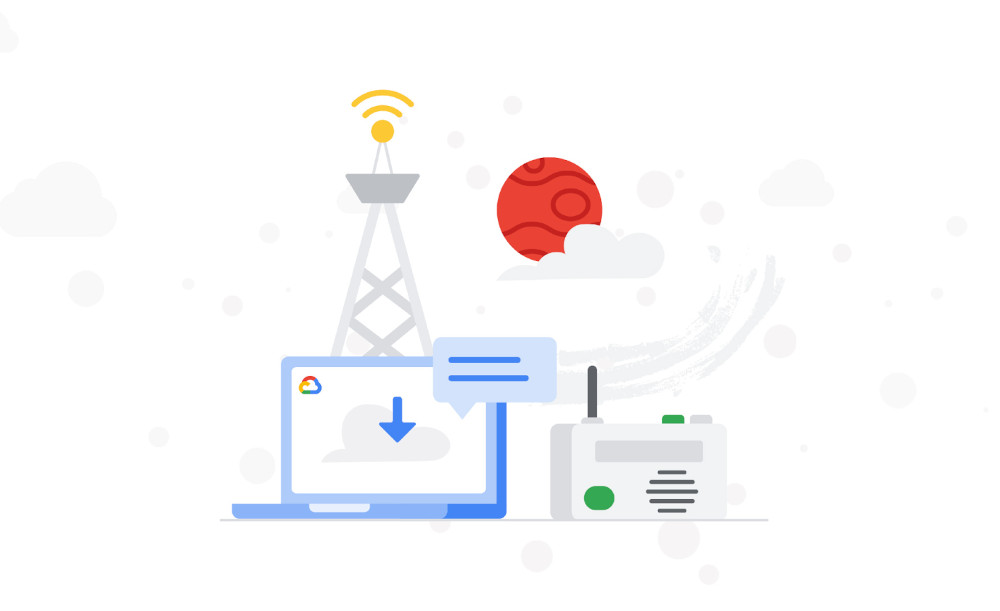